In 2020, the Chicago History Museum partnered with the filmmaker, Geoffrey Alan Rhodes, to produce a virtual reality experience of the 1893 World’s Fair in Chicago. The centerpiece of the experience would be a recreated ride on the original Ferris Wheel using historical photographs, taken through the windows of the passenger cars more than 120 years ago, matched with VR drone photography above the site, and a 3D animated recreation of the wheel and the car interior.

This case study describes the project, the process, and the essential role of RebusFarm’s generous support.

3D, 8K VR video of the 2.5-minute ride on the 1893 Ferris Wheel. This video was the climax of our 11.5 minute narrated VR experience which you can find at the end of this article. 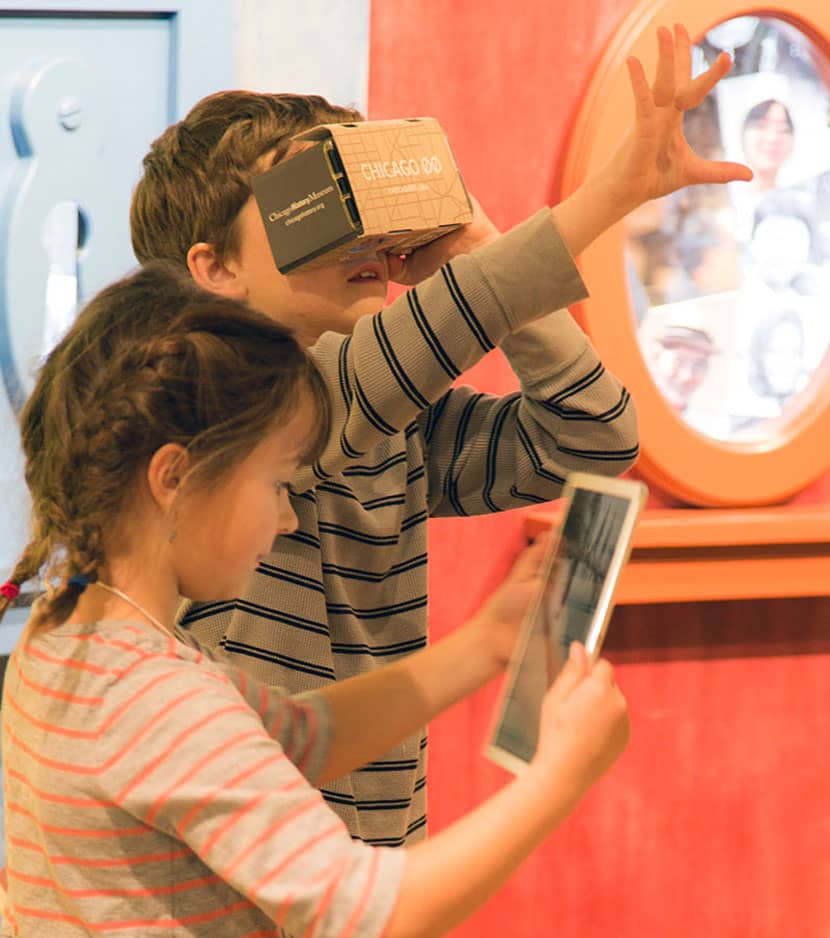 Visitors experiencing a Chicago00 VR experience at the Chicago History Museum (image courtesy of the CHM).

The Chicago 00 Project is an ongoing collaboration to produce new media experiences of the Chicago History Museum’s photo archive. Since 2016, we have produced 5 experiences— published as apps, VR videos, and web portals— each focusing on a specific Chicago story and archive of photography. It’s a non-profit project, with episodes funded by foundations (this 1893 episode, was funded by the National Endowment for the Humanities). Many of the project’s creatives volunteer their time outside of their day-jobs, motivated by their fascination with the project. Each episode tries to do something new, inspired by the unique historical content, and always seeks to create some new and special connection between the history and the present day site. With the 1893 Columbian Exposition, a unique opportunity was presented by aerial photographs taken during the fair from the rooftops of the fair buildings and especially from the cars of the Ferris Wheel as it traveled 260 feet above the Midway (at that time, an exceptional height for any man-made structure). 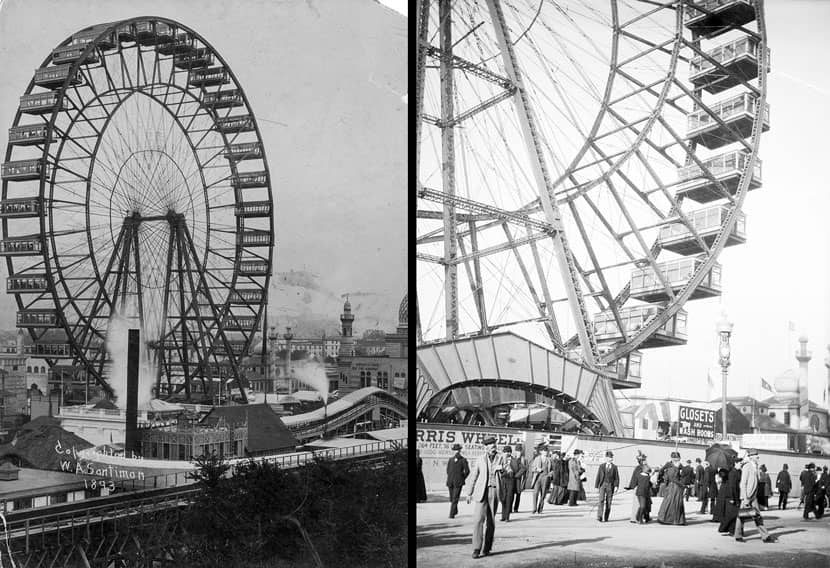 The Ferris Wheel in 1893 seen from the south (images courtesy of the CHM).

The site today: a skating rink in Midway Plaisance Park adjacent to the University of Chicago campus (image courtesy of the Chicago 00 Project). 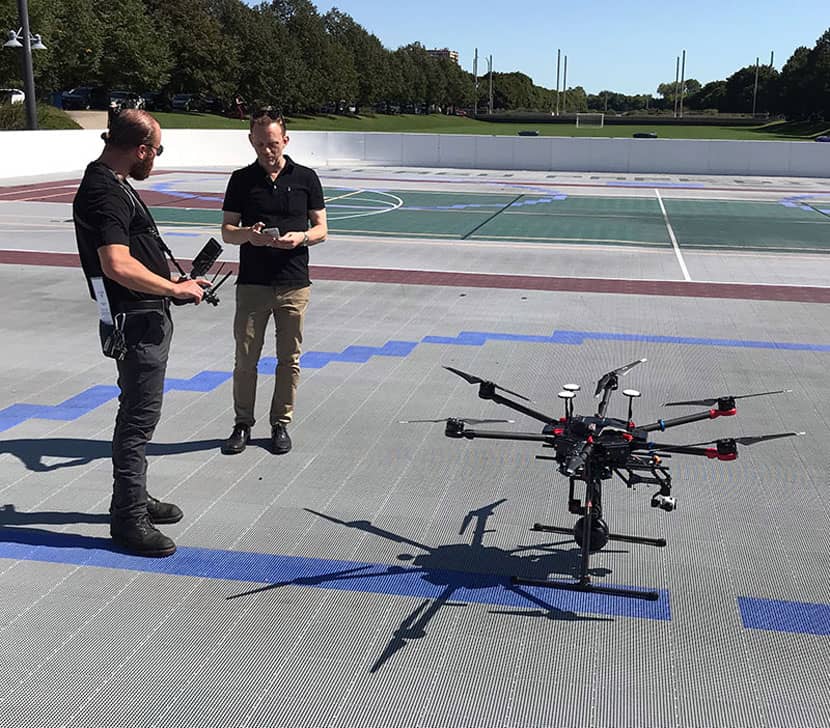 Rhodes (right) and a member of the Aerovista Innovations team at the site of the ferris wheel shoot; the drone is equipped with a stabilization gimbal and an Insta360 Pro VR camera (image courtesy of the CHM). 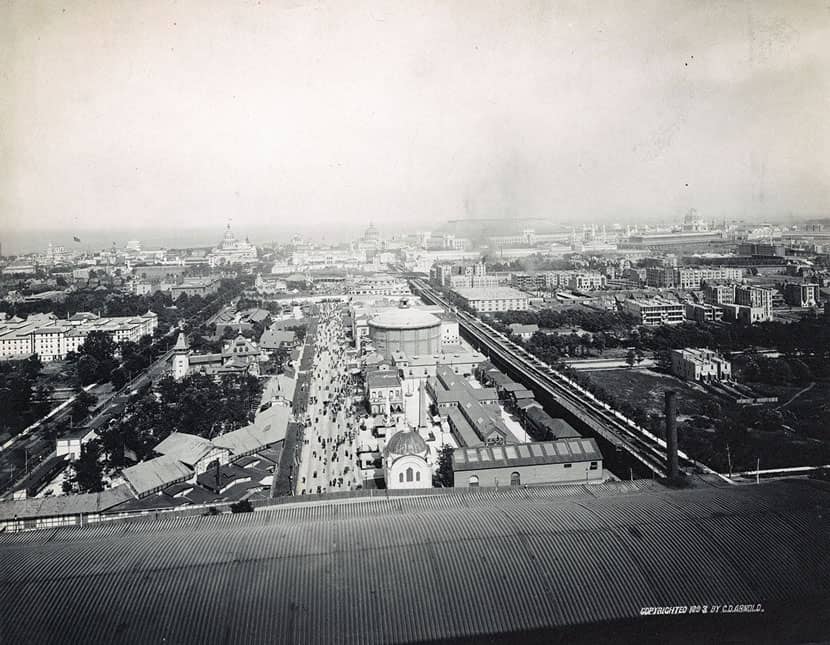 A view looking east out the Ferris Wheel window in 1893 (image courtesy of the CHM).

A similar view today taken from a drone-mounted VR camera (image courtesy of the Chicago 00 Project).

The Chicago 00 Project partnered with the Chicago-based architectural artist, Jacob Waas, to create an animated 3D model of the ferris wheel cabin. An early challenge was that we found no pictures of the wheel’s cabins— only photos taken from outside, or through the windows, and historical accounts that differed significantly in their descriptions of colors, dimensions, and characteristics. We relied principally on primary, photographic evidence, and piece by piece built a model of the cabin, and the structural armatures of the entire wheel. At the same time, the team worked with the Chicago aerial photography company, Aerovista Innovations, to capture in 8k 360 spherical video the circular path of the 1893 Ferris Wheel, flying a camera above today’s Midway Plaisance Park by the University of Chicago. The vision was to combine these two productions— the 3D animation of the wheel and the contemporary VR drone photography— with the historical photographs taken at the site in 1893, to create a then-and-now experience of the ride that would make audiences feel they were inside the original Ferris Wheel. 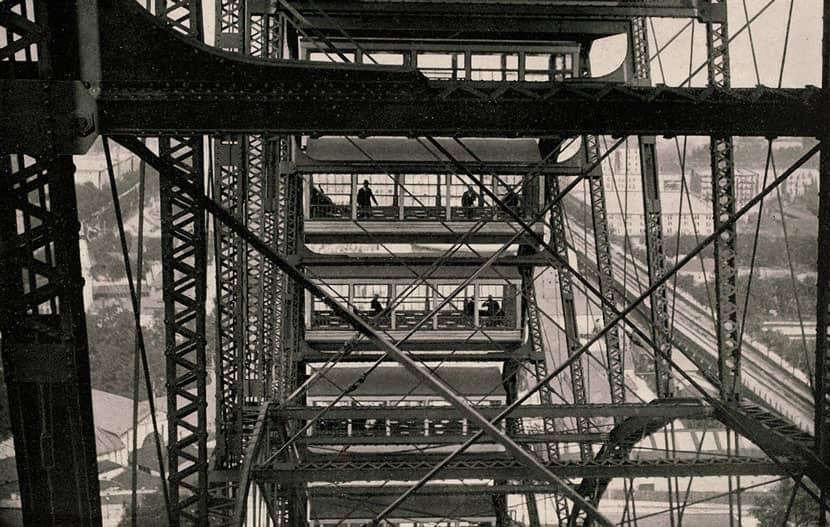 Historical photos, like this one, were essential to accurately recreate the wheel. Here, not only can you see details of the steel armature, but you can actually count the number of chairs in the wheel’s cars (image courtesy of the CHM).

The site of the wheel wasn’t the only location captured for the project. Multiple sites across a 1.5 mile stretch of Jackson and Midway parks were photographed, matched with collections of historical photos, and produced as 8k 3D VR spherical images to be incorporated into a narrated tour and an online map portal. Most of the content was produced as stills, but for the ferris wheel, it seemed essential to capture and render in VR video, to give audiences an experience of actually riding the 1893 wheel. To produce an animated render at this scale (4500 frames of 67-megapixel images), a render farm service was essential. Without the generous support of RebusFarm, it wouldn’t have been possible. Jacob Waas had used their services before, and their seamless plugin with Cinema4D allowed for quick testing, sharing of renders, and, most important, a way for Jacob to do the rendering within the hours he was able to give. 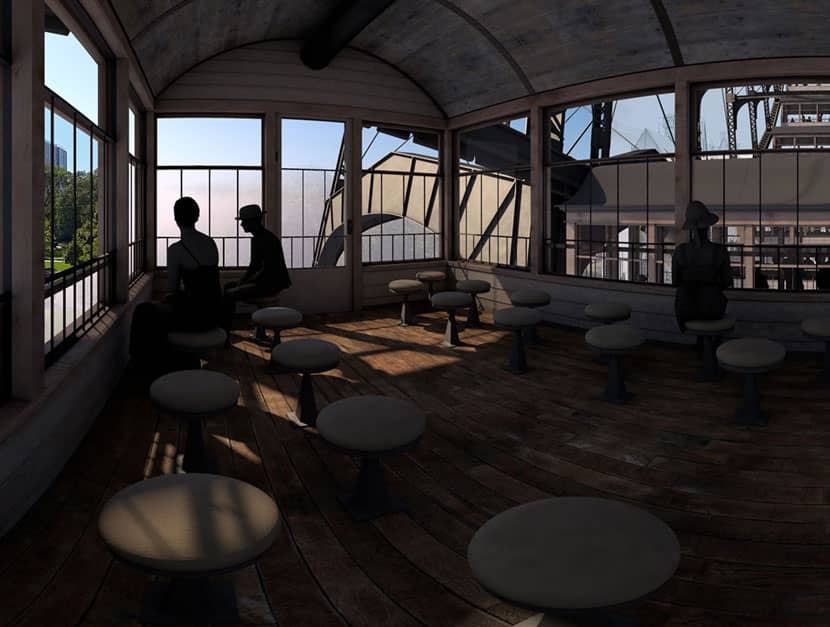 Looking southwest from the ferris wheel cabin as it begins its ascent. 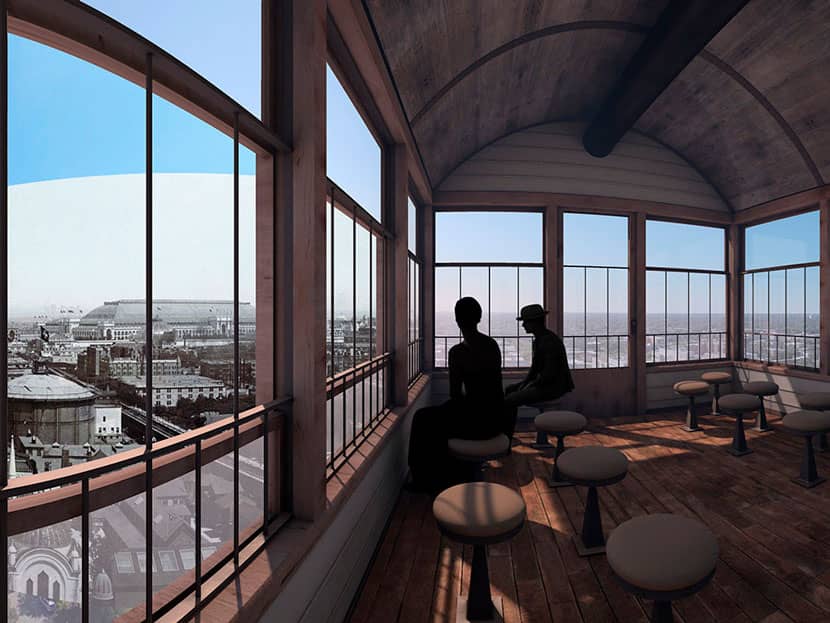 A crop from a spherical VR rendering of the Ferris Wheel: floating about 200 feet above the University of Chicago, the elevation matches photographs taken from the wheel at the same place in 1893.

Looking west-northwest about 60 feet off the ground with matched historical photos visible through the windows.

As part of the project, we contracted with HG & Co., a company specializing in the analysis of museum visitor experiences, to assess the impact of the project, and how it compared to other museum exhibition formats, especially as it concerned audience education, empathy, and engagement. A series of test audiences and screenings were programmed at the Chicago History Museum, and their engagement with the experience of riding the recreated wheel stood out. People talked about their feeling of being “present” within history. To quote from the Executive Summary of the evaluation:

“The Ferris Wheel brought participants out from behind the window pane, into the historic world itself. [...] 58% of testers specifically said the most memorable experience was the Ferris Wheel. [...] Testers described those few moments in real-world terms. They described the feeling of moving, or “riding,” the wheel, as if they were actually on it.” 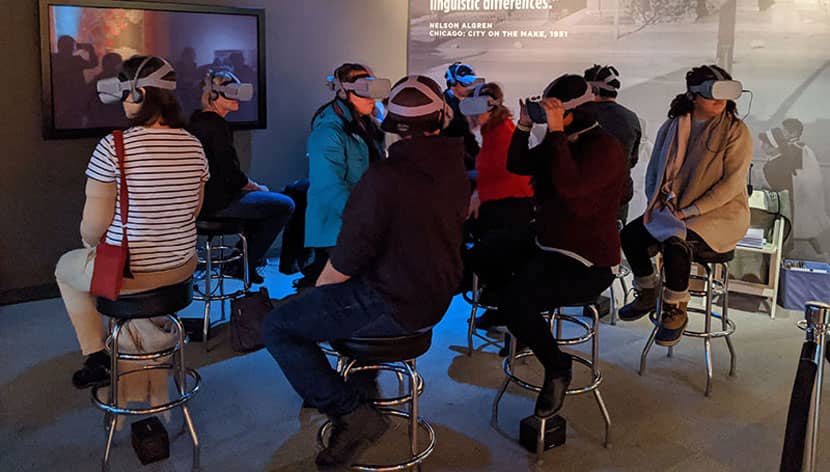 One of the VR evaluation sessions at the Chicago History Museum in 2020 (image courtesy of the CHM).

The virtual experience of the fair has been shared with audiences through multiple formats and venues, including Oculus, Youtube VR, and a web portal that allows audiences to explore the site and the connected historical photos, through a map interface. The web portal, as of this writing, is a finalist for a 2021 GLAMi Award (Galleries, Libraries, Archives, and Museums Innovation award) for the best online experience of a museum collection.” 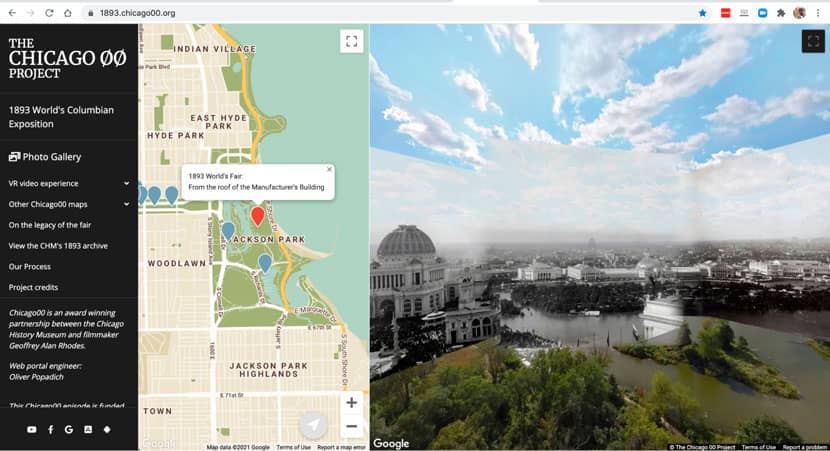 A screen-capture of the Chicago00 online map experience of the 1893 Columbian Exposition.

Across platforms, the project has attracted more than 100,000 unique visitors, and individual VR images of the project (including the wheel) have been viewed more than 3 million times. For a city history museum, these numbers are orders-of-magnitude larger than visitors to in-house exhibitions.”

Non-profit collaborations feed on momentum, interest, and partnerships. The Chicago 00 Project is grateful for all the help we have received, from industry partners like RebusFarm and Google for Non-Profits, to foundational sponsors and all those who have volunteered their creative time. Their support, and the success of this project, have spurred new work and ideas. We are currently producing an experience of the 1871 Great Chicago Fire, in partnership with the Future Museum Studio at Shanghai Jiao Tong University’s Institute for Cultural and Creative Industry. The experience is based on the 500 foot cyclorama oil painting, created in 1891, that depicts the scene of the fire in living color, and will form the basis of a narrated, VR experience of this Chicago story. The new episode is to be released in October of this year, marking the 150 year anniversary of the great fire.

Here, you can enjoy the complete 11.5 minute narrated tour of the 1893 World’s Fair in Chicago (including the ride on the wheel).

We thank Geoffrey for taking the time to share his project with us and wish him all the best in the future!

Keep up with Geoffrey Alan Rhodes and his work here:

Do you want to get featured in our ArtWanted! campaign and win 250 RenderPoints on top? Submit your work, rendered at RebusFarm, to This email address is being protected from spambots. You need JavaScript enabled to view it.! Visit our Art Wanted! page for more information.