What is a Render Farm? Everything you need to know about Render Farms. 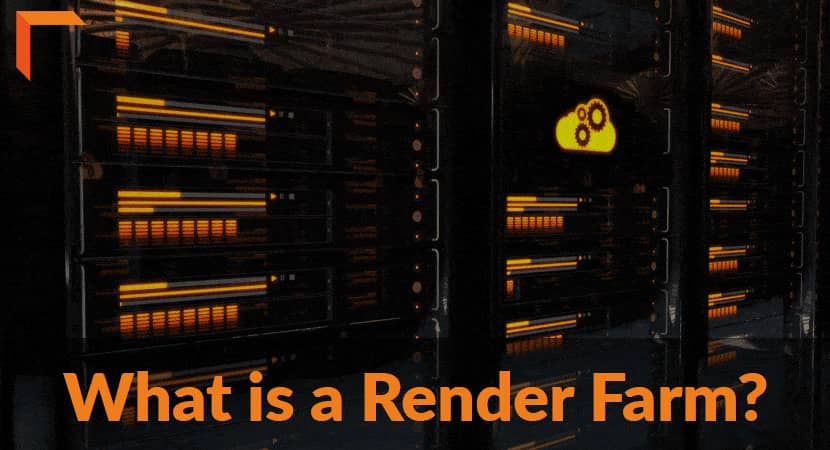 Ever hear the word 'render farm' and wondered what it is? This article will explain in detail, what a render farm is and how it works.

Quickly explained: a render farm is a computer system/data center which is specialized in the calculation of computer generated images (CGI). It's mainly used to create films, visual effects, as well as, architectural visualizations. Continue reading for an in-depth explanation.

How does rendering work?

Animations and 3D visualizations have to be calculated to define light, shadows, reflections and much more – which is called rendering.

For this process, however, the 3D software and renderer require not only a lot of computing power but also time.

Let's get into some numbers to make it more clear:

How long it takes to calculate one single frame highly depends on the:

Meaning that a scene can either be calculated within seconds or it can take many minutes or even hours.

Taking a simple scene as an example. A computer system, that can calculate a simple scene in 10 seconds, still needs about 4 hours to calculate a 1 minute sequence. The system will work 4 hours at full capacity making it unusable during this time.

It's not uncommon for a high-quality animation based on complex 3D scenes with composite lighting calculations to take up to 30 minutes of calculation per frame.

Assuming that we have an average render time of 10 minutes, the local computer system, running at full capacity would need 10 full days to calculate the frames.

Quite long, right? That's when a render farm comes in handy.

What is a render farm?

A render farm consists of many computer systems, specialized in the calculation of 3D images. These are called render nodes.

Each of these render nodes has the required 3D software, the renderer and needed plugins installed. Additionally, the hardware is optimized for CPU and GPU rendering.

Larger render farms have up to thousands of render nodes.

How does a render farm work?

Since a render farm has many render nodes, the frames of a 3D sequence can be calculated simultaneously on these nodes.

Taking the example we used before – if this sequence is calculated by one hundred render nodes instead of just one local system, 10 days of rendering shrink to 2.5 hours.

This makes it possible to reduce the rendering time notably.

How much does a render farm cost?

The costs to run a render farm are very high. The hardware of the render nodes must always be up to date. The software has to be licensed and the render farm needs a complex infrastructure, maintenance and a lot of power.

Additionally, fees per frame for various 3D software and renderers have to be paid.

That's why there are commercial render farms, that users can rent and only pay a small percentage of all these costs, avoiding high costs, while still profiting from really fast renderings.

Image of a commercial render farm

What kind of render farms exist?

If an artist has several computers at his studio, he can use them to complete the rendering. In this case, we're talking about a self-built render farm. Larger studios may use hundreds of self-deployed servers to render a project. However, this requires a high level of technical skills for the setup and maintenance. Further costs arise for the hardware and software, manpower and energy.

With a cloud based provider/commercial render farm, the user has the advantages of a render farm without all the costs for maintenance, hardware, software and energy costs. The user can start rendering right away, doesn't need high technical skills and thus will save money. Lastly, the greatest advantage is the speed of the rendering process, as well as, having the own computer available, while the project is rendered online.

How do commercial render farms work?

Commercial render farms are very easy and comfortable to use.

Once registered with the provider, there is usually a software that you can download. This software integrates into your 3D software, which makes the usage very easy.

Some render farms, like RebusFarm, offer their users a ControlCenter, where they can check the progress online or in the render farm software.

The currency used on RebusFarm, is called RenderPoints. Just like many render farms, RebusFarm offers a cost calculator to estimate the expected costs (or how many RenderPoints you will need).

What are the advantages of a commercial render farm?

There are many advantages in using a commercial render farm:

When choosing the right render farm to use, you should not only look for the costs but also how easy the procedure is, just like the service and fairness of the provider.

Video explaining what a render farm is